Last week we had the pleasure of interviewing one of the most respected thought leaders in the art scene, and one of the earliest collectors of CryptoArt. If you’re an active Twitter fanatic and an art devotee, you’ve probably come across the work of Jason Bailey.

Jason is the mastermind behind Artnome, the world’s largest analytical database of complete works by important 20th century artists. Artnome is also the leading art and tech publication for reporting on and explaining the use of cutting-edge technology in art and the art world. Bailey’s extensive research in this field has positioned him as a sought-after speaker in the art world, and he’s previously spoken about blockchain and digital art at Christie’s blockchain event in London.

Being an OG in the space, Bailey recently launched his own NFT project, which addresses and provides a solution to one of the most pressing questions about NFTs – where are NFTs stored and how do we know they won’t disappear if a marketplace were to go out of business?

ClubNFT Addresses Major Flaws in the Core Infrastructure of NFTs

Bailey was one of the first big NFT art collectors from all the way back in 2017, meaning he’s been around the block(chain), a few times in fact, and he knows what to watch out for.

He says that back then no one knew about how and where NFTs are stored, and that he assumed all art/image files and descriptions lived on the blockchain. But he learned how very wrong he was when during the 2018 crash most marketplaces that were active at the time – such as, Ascribe, Rare Art Labs, Editional, Digital Objects, and more – went out of business.  Many collectors, including Bailey, lost millions of dollars when their NFTs broke or suddenly disappeared.

“It turned out 90% of the time we were dependent on those marketplaces staying in business to avoid our NFTs breaking – though few of us realized it until it was too late,” he commented. “When NFTs started taking off again in a big way in 2021 it felt like deja vu for me. I knew we were in for a major disaster because nobody had addressed the problems with marketplace dependency that collectors like me experienced in 2018″.

At the start of the NFT boom in 2021, Bailey saw that there was way more money at risk this time around and that the industry was heading into the exact same disaster, and perhaps even worse than before. This time, he could see it was not just a few million at risk, but a market worth tens of billions, and that’s when the idea for ClubNFT was born.

While everyone was busy cashing in by creating more ways buy and sell NFTs, nobody was working on the fatal flaws in the core infrastructure of NFTs that plagued collectors during the first crash.

“I kept waiting for someone to build a tool for collectors to protect themselves, but it never happened. So I decided to take on the challenge myself and started ClubNFT with my co-founder, Chris King“.

When a user backs up their collection with ClubNFT, the team follows all the links in the IPFS-based NFTs and gathers up the offchain assets, which are typically the actual art and artwork descriptions, and they zip them into a backup file for the user.

The user can then download that backup and store it wherever they please, such as on online services like Google Drive and their own hard drive. If those files were to ever disappear from IPFS, they can be restored with the user’s local backup and the NFT is as good as new. This guarantees that the value of their collection is protected.

“Think of it as free NFT insurance for your IPFS NFTs. For context, roughly 50% of all Ethereum NFTs use IPFS and from what we have seen with our users more than 90% of Tezos NFTs use IPFS.” 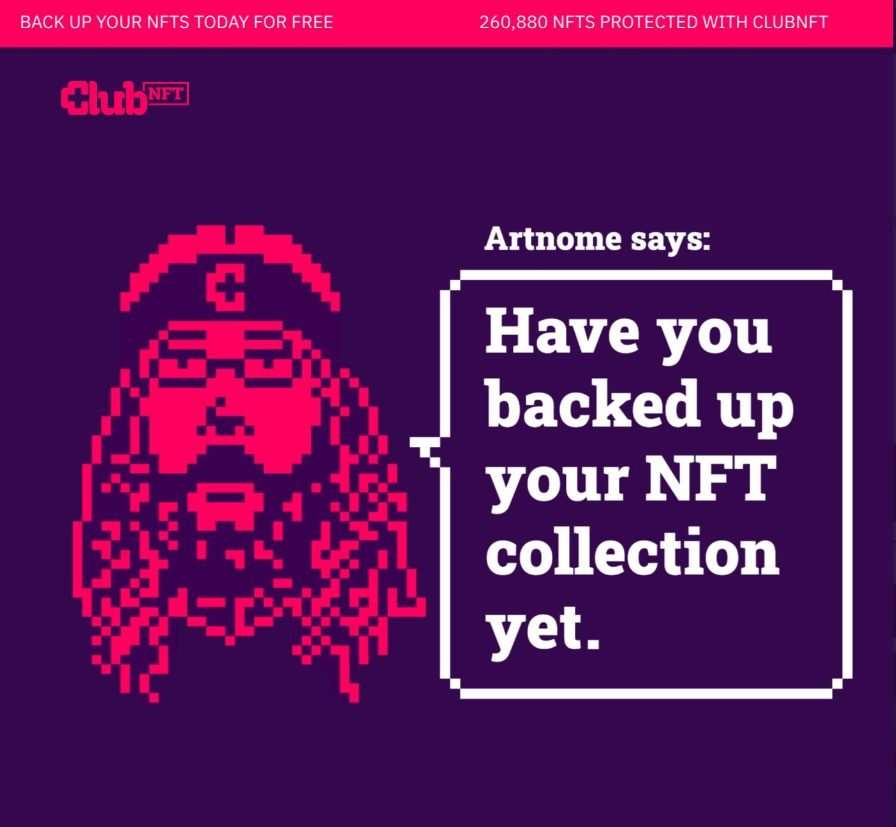 Anyone Can Use ClubNFT with Zero Technical Knowledge

Luckily, the ClubNFT backup tool is super easy to use and anyone can do it in just a few minutes.

To use the tool, simply create an account using your email, add as many wallets as you would like to backup, check our analysis of your storage risk, and download your backup. It’s easy and it’s free! You don’t even need to connect your wallet app, approve any transactions, sign any messages, etc.- it’s zero friction.

Bailey revealed that they have backed up almost 5,000 collections and well over half a million NFTs. “You are in good company and good hands when you use ClubNFTs backup tool“.

Bailey is Building a World-Class Team for ClubNFT

There are 17 people on the team between ClubNFT and his other publication RightClickSave, and as with many Web3 companies, they are spread around the world.

Bailey is a huge believer that hiring well is 90% of building a successful company, and they have been incredibly patient and careful with who they bring on.

“Right off the bat I poached Chris from Google, where he had spent 6 years as a software engineer after 7 years in legaltech and fintech startups. Chris and I had actually known each other for many years through my brother – they were college buddies. We quickly brought on his sister Danielle, who has dual Ivy League degrees, experience on Wall Street and in the art world at the highest level including MoMA where she managed the painting and sculpture department. After we secured our seed funding last Fall we brought on my brother Matt Bailey to run the Engineering team, and we have continued to add top talent ever since. I think part of why we have been able to do so much so fast is because this early core team has such close ties – we trust each other implicitly.”

Market Correction is a Positive Thing for the NFT Space

As expected, the crypto and NFT market has taken a downturn these past couple of months, and we’ve already seen Twitter quieting down, a lot. Some have lost large amounts of money and many have lost their initial conviction, for now at least.

Bailey, however, says that even though it can feel painful in the short term, he is thrilled there is a market correction in the crypto and NFT space. He believes the space grew too fast in 2021 and that the massive media coverage on getting rich from NFTs followed by news about scams put an emphasis on the worst aspects of CryptoArt and NFTs. But now that things are quieting down, we are seeing the traditional art world starting to embrace NFTs and even become curious about CryptoArt history.

“When the hype goes away, all that is left are dedicated artists, collectors, curators, and builders, and those are my people. They are the ones who will patiently elevate this space to the next level over the years to come”. 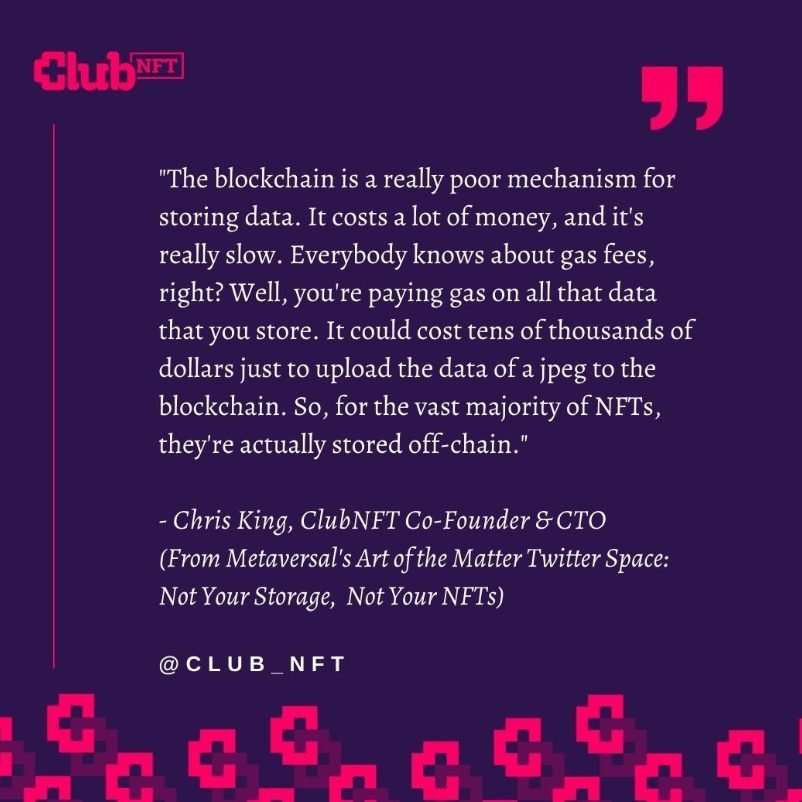 Since Bailey is pretty much an OG in the space, we asked him what advice he has for artists who want to get started in this unpredictable and constantly evolving space.

According to Bailey, a lot of artists come into the space purely looking for ways to make money and then leave rather quickly because they don’t have any success selling their work. So as with entering any community for the first time, artists should rather focus on the value they can contribute instead of immediately trying to find a way to extract value for themselves.

“There are lots of amazing communities in the NFT and crypto art space. Find one that resonates with you, and take a sincere interest in other artists and collectors before trying to push your own work onto them. Be patient, thoughtful, and considerate, and people will eventually take an interest in you and your work“.