This article will discuss Gods Unchained and Skyweaver, the two biggest CCGs. 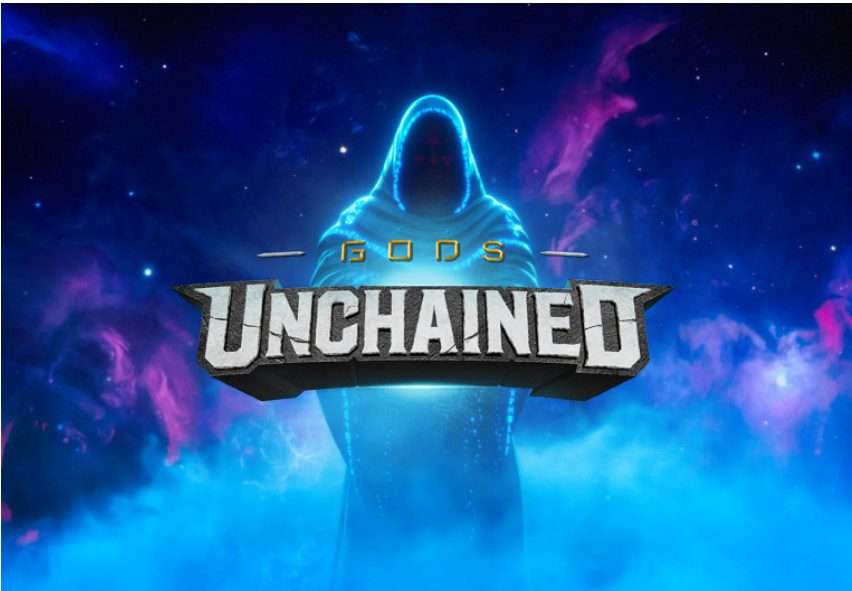 Gods Unchained is an Ethereum-based free-to-play tactical NFT card game. It is currently one of the most popular blockchain play-to-earn (P2E) card games. There are over 13 million Gods Unchained NFTs and approximately 65,000 unique asset holders. Since the game’s inception in March 2021, users have traded over $25 million in assets.

Minting cards and goods provide options for earning money and complete ownership of the items. If you’re already familiar with classic TCGs, playing Gods Unchained would feel natural. Players do not need to be familiar with blockchain technology or cryptocurrency to begin playing.

Although the cards are stored on the Ethereum network, users only interact with the blockchain when they trade cards with other players.

To create new cards, players use the game launcher to visit the Forge and combine duplicate core cards to create higher-quality cards. These are designed and then added to the Ethereum network, where they gain real-world value.

Finally, players use the marketplace to trade these cards for real-world dollars. Players can then utilize existing profits to buy more cards, or convert them to actual money. 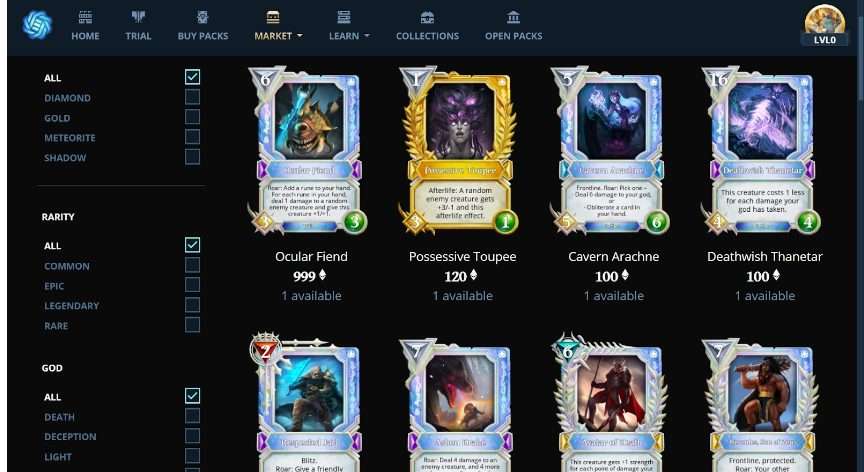 Some cards in Gods Unchained are NFTs, which players can trade for a profit on secondary markets. Players can’t sell the core, common, and welcome set cards they get after sign up. However, players can compete and earn Flux, this improves non-blockchain cards and can be officially converted into tradable assets.

Cards at the Meteorite or higher level are tradable. Cards with gray borders are common quality cards, not NFTs, and cannot be traded.

When new sets of cards, like the Trial of the Gods set, are issued, they must go through a balancing step before players can trade them. 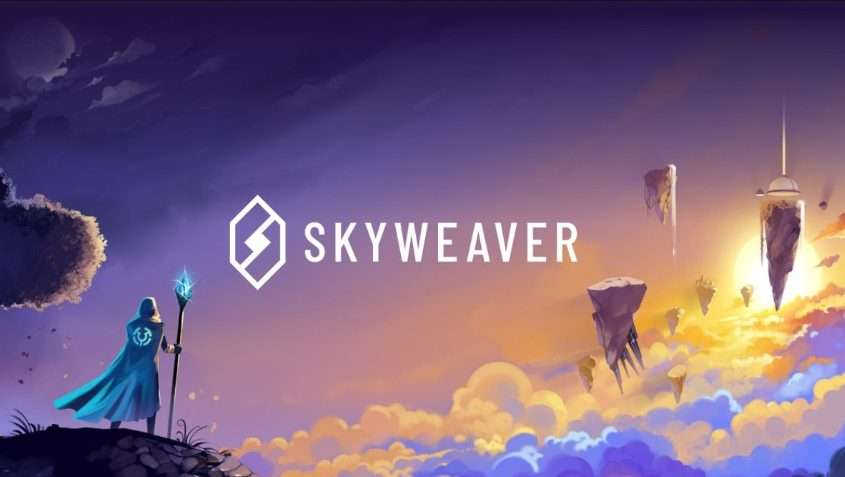 Skyweaver is a blockchain-based online trading card game with in-game cards as NFTs. In turn-based combat, players utilize the cards to battle other players. It’s a singleton game, which means the cards are different, so you don’t have to collect multiples of them as you would in Pokémon TCG.

Horizon Blockchain Games, led by Reddit co-founder Alexis Ohanian, raised over $3.75 million in fundraising for Skyweaver. Horizon has taken its time developing this game, beginning production in 2019, and Skyweaver was released in steps, starting with a private beta in 2021.

According to a Skyweaver press release, over 2.2 million matches have already been since the open launch. Skyweaver is 100% free to play, and leveling up unlocks 500+ base cards. There were no card pre-sales, which prevented consumers from rushing in and buying everything.

The cards are one-of-a-kind, with three grade types and various features that make games dynamic and intriguing. 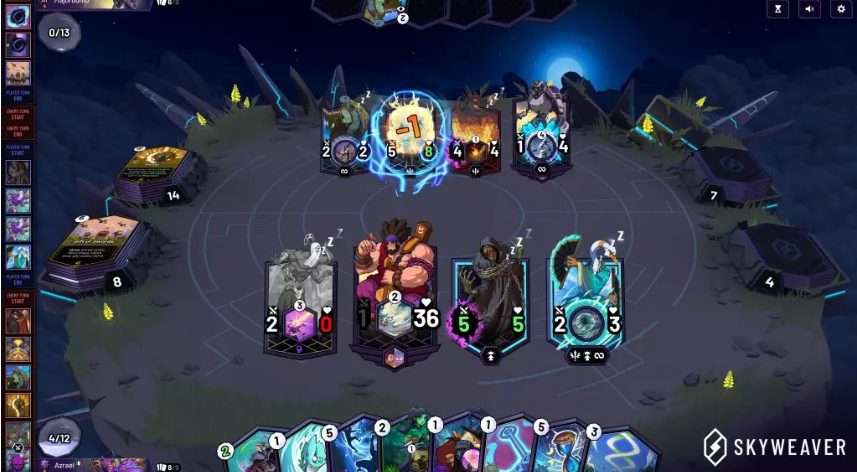 There are numerous ways to play, and you can even play private battles versus friends.

Conquest is a player-versus-player (PvP) game mode focused on winning streaks. Players start this game with only one life, and the highest reward is obtained by winning three matches. Players are eliminated after losing a game. In this mode, players can earn rare Silver and Gold NFT cards.

Battle against other players to improve rank on the leaderboard. Players can win Silver NFT cards in this mode.

Play against friends in private matches or bots in practice modes. Tutorial modes also teach players how to play various types of games and techniques.

There are two game types for each game mode: Discovery and Constructed.

Experiment with various heroes and deck combinations. In this mode, players are given a random 25-card deck based on the prism(s) they chose, and can earn cards and level up.

Players build their deck of cards to suit personal playing style. If players don’t have enough cards to build a full deck, the game will autofill the remaining slots.

If players select the Discovery type, the game engine merges players who are playing Discovery, meaning each player has a randomized deck. Once any player has accumulated enough cards, they can try Constructed Mode to handpick their deck for a more personalized play style.

Playing Discovery mode can be pretty beneficial to beginners. Before players have any cards in their arsenal, they can experiment with different cards, understand how the game works, and then acquire cards. 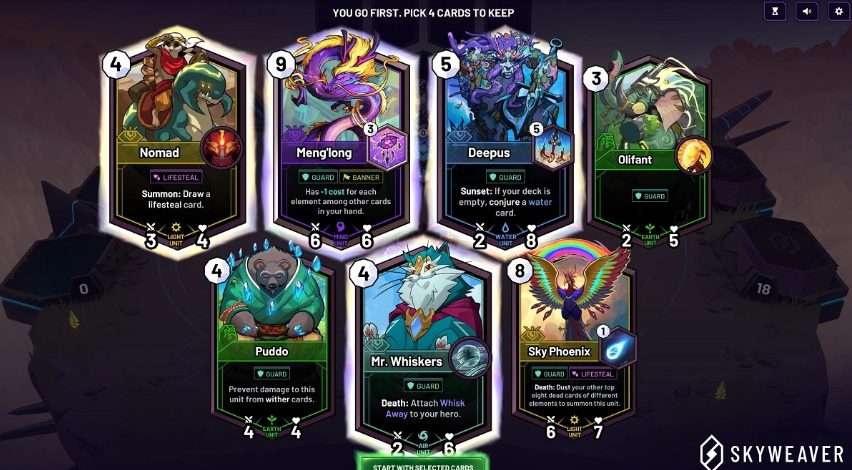 Skyweaver’s in-game money is USDC, a stable coin backed by the US dollar. This is an ERC-20 token. Skyweaver also employs Horizon-coauthored ERC-1155 tokens to construct fungible and semi-fungible currencies. These tokens are used to make the cards.

The NFT assets on Skyweaver are straightforward: they are the cards that may be played, collected, and traded. Players own the cards they hold, thanks to NFT technology. Because players are the only ones who have access to their assets, the Skyweaver developers cannot claim or move them. This also implies that players can swap them whenever they want with almost no limits.

The NFT cards are created through playing the game and unlocking cards. The card designs are simple – charming, dark, intense, and bright — and incredibly diversified.

Gods Unchained is still one of the most popular blockchain trading card games. The Gods Unchained website contains many learning materials, and a transparent marketplace, and it’s free to start playing. There are opportunities to earn as players progress and forge new cards, but it may be a long burn depending on how much time players devote.

However, Skyweaver is a TCG with more benefits than problems, thanks to its straightforward user interface and F2P structure. The most significant disadvantage could be the learning curve of adapting to a new TCG, but testing the game out is free, so it’s risk-free to give it a shot. Just don’t expect to make a lot of money.

Matt is a digital marketing and copywriting specialist with ten years experience. He is an avid play-to-earn gamer, NFT enthusiast and crypto investor.